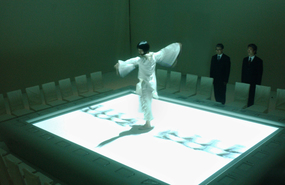 post theater visits Tokyo to research fish, fish consumption and culinary culture around fish in Japan. This is preparation work for the upcoming multi-media performance "Fish-Tales" which will premiere in the Winter of 2009 / 2010 in Berlin and then tour to co-production partners in other cities.

- fish and identity in Japan: how do people in Japan relate to their fish consumption
- fish and knowledge in Japan: do people know where their fish is coming from?
- fish as commodity: where is fish in Tokyo sold, presented and consumed?
- special attention is brought to tuna for its crucial role in the Japanese diet and identity.