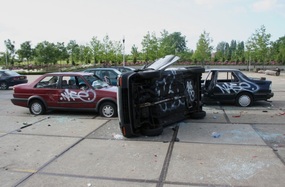 Together with Jonas Staal, a visual artist with whom Van Gerven Oei has forged a continuous collaboration, he was invited by TWS as "researchers in residence." Their main lies in the exploration of the meaning of public space in the city of Tokyo and the relationship between the notion of public space and the concept of 'democratism' in Japan.

Van Gerven Oei and Staal will produce a series of public interventions, introducing a selection of individualized forms of protests from the Netherlands and the United States to Japan using Japanese performers. The performances will consist of actions that reflect on the nature of protesting itself. The results will be presented in a free publication.