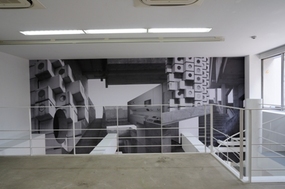 "PSYCHOANALYSIS" Gazes on Photo and Video Art from Austria (CAMK)

In collaboration with Helmut Weber, Sabine Bitter is carrying out a project focused on urban geography, architectural expression, and various issues concerning the "visual politics" relating to these matters. During their residency in May 2010, they carried out research into the Metabolist Movement, which is Japan's leading architectural movement . At the exhibition entitled"PSYCHOANALYSIS: Gazes on Photo and Video Art from Austria", which took place at TWS Shibuya, they presented their EN series, consisting of photo-montages featuring Metabolist buildings that they had created during this residency.

Could you tell us about the activities and events in which you were involved at TWS
and describe your achievements as a result of your residency programs?
During my residency with Helmut Weber we carried out a research project on the
Japanese Metabolist Movement since the 60s. Through this specific research and our long-term interest in spatial theory, we had fruitful discussions with architects, theorists and artists, who shared our interest in urban architectural projects and their theoretical backgrounds.

Could you tell us about any episodes that made an impression on you during your residency?
During our residency at the TWS, we met Souhei Imamura, who gave us a tour of Aoyama which illuminated the urban texture and architectural history of the area. In addition, he introduced us to Professor Hajime Yatsuka, who's work on the Metabolists will certainly inform the projects we are planning in the future, such as the exhibition "Where Was the World?", which looks at urban space after massive events.

Could you tell us how and in what way your residency programs at TWS have developed and affected your career after the programs?
We have made many useful and exciting artistic and cultural connections in Japan that we hope will allow us to engage in collaborative projects or exhibitions in the future. We plan on making new work which will redeploy Metabolist concepts and images.