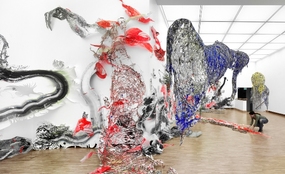 I have visited Japan, and also Tokio, in 2009 and 2010 for working stays and artistic research, and my interest in the Japanese culture is still growing.
During my stay, I want to investigate Japanese images and myths dealing with natural forces and the problem of human control over them. The power of natural forces and the antagonistic power of human technique, which can turn into a curse, has been again and again painfully felt by Japanese people, recently in March 2011 and still, but also many times before.
I am interested in the clash between nature and human control, and also in the struggle with controlling human drives. Such is e. g. reflected in ukiyo-e-woodprints, in Kabuki-theater, and in oral narrations and folklore tales, for example about ghosts in Shinto and Buddhist religion, and also in popular culture like Manga-tales. These tales can give an insight in collective fears and desires.
Based on a collection of stories and material gathered during my stay, I want to develop drawings and spatial paper structures, which incorporate and transform the essence of those myths about natural forces, and make them palpable in physical space.
Within the programme of Tokio Wondersite, I want to create a dialogue with the art community of Tokio, and also with people from other fields. During my stay, I hope to learn from Japanese culture and art. I also hope that my work can provide aesthetic experiences which can overcome the restrictions of culture and space, which divide individual human beings.

During my stay, I want to develop drawings and cut-outs based on narrative and material researches. These drawings can be the point of departure for a three-dimensional paper work in the TWS space.
As a way of research, I also want to ask local people about oral stories and myths (such as the creation myth of Izanagi and Izanami, or the myth of goddess Amaterasu in her cave). I am especially interested in the blurring of boundaries between the realm of the dead and the living, between human beings, animals and natural forces, which seem to play a big role in Japanese myths. I want to talk to people personally and exchange our cultural knowledge of myths, and also talk about their experiences, fears, believes and stories concerning natural forces and technical desasters, especially after the desasters of 2011. It is important for me to get an immediate contact with local people, in order to understand more about the culture and the manifold layers of its tales.
Furthermore, I want to research in Tokio`s art museums, collections, galleries, book shops and libraries.
I am also very much interested in the material aspect of an artwork, which reflects and incorporates the narrative aspect, and cannot be separated from it. Because of that, I want to learn more about Japanese handicraft art, like e.g. paper handicraft and art. My focus will be Japanese traditional art. As drawing plays a core role in my work, I want to get to know more about Sumi-e, the Japanese art of Ink drawing. I would like to see original Japanese ink drawings and I am also interested in practising myself this concentrated and meditative way of expression.