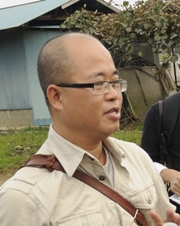 Born in Ha-Tien, Vietnam in 1968 and currently reside in Ho Chi Minh City.
He received his BA in Art studio at UC Santa Barbara in 1989 and his MFA in Photography and Related Media at The School of Visual Arts in New York City in 1992.

Besides being artist, Lê also co-founded Vietnam Art Foundation-VNFA based in Los Angeles, an organization that supports Vietnamese artists and promotes artistic exchange between cultural workers from Vietnam and around the world.  Through VNFA, Lê co-founded San Art, a none profit gallery in Ho Chi Minh City.  He is currently a board member of the Art Network Asia, and a member of the Asia Society's international council.

The latest work, The South China Sea Pishkun, is a 7 minutes 3D animation restaging a tragic and unimaginable incident during the last day of the Vietnam-American War.  On April 30th, 1975 as the North Vietnamese Army and the Viet Cong marching towards Saigon and other cities in South Vietnam, thousands of panicking Southern Vietnamese Army, American military, and US diplomatic personnel were trying to get out of South Vietnam.    Hundreds of US helicopter were fleeing in panic toward the South China Sea, searching for US Army's aircraft carriers to land.  Many never found the aircraft carriers and eventually they crash landing in the South China Sea after running out of fuel.  With America contemplating its' position and withdrawn strategy in Iraq, South China Sea Pishkun is a timely revisit of this tragic event.