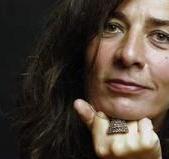 She applies the result of her studies in the field of gaze by placing the audience next to the stage, twisting perspectives, or erecting a "fourth wall" on the stage. As a result, works such as Vodka Konkav and The Malady of Death, created between 1993 and 1999, received international acclaim. Her pieces after 2000 revolving around political power emerge out of simulated exile and inner immigration situations, as seen in Letters from Tentland, produced in Tehran for six Iranian women, and in return to sender, Waldmann's comment on European immigration policy formulated by six exiled Iranian women.

Her latest production, Burka Bondage can be described as a forced disappearance of the body from society, staging a marathon of lust and pain. All of these works have been creating a worldwide stir as political avant-garde theatre.

BurkaBondage is the passion and pain of two female dancers struggling
for freedom from under the burka, total Islamic coverage, and the
restraints of Japanese bondage. By the apparent antithesis of the two
extremes of exposure and masking, Waldmann follows the binary
logic of power and powerlessness, pain and pleasure through to its
culmination in a West-Eastern yearning for freedom and self-release. 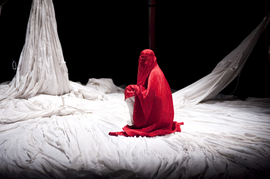 In Iran, Waldmann caused a political sensation with a company of dancing tents: Letters from Tentland is the first piece by a foreign female choreographer to be staged in Iran for more than thirty years. It carries a post-modernist, in many ways ironically-broken movement language into an ultra conservative arts industry in which stage dance has been taboo for 25 years. It dares to bare emotions in a dictatorship of belief where theatre is normally a static table discussion.

Here, necessity is the mother of nimbleness, which is the reason why Waldmann's pieces are amongst the most important current political works in dance. The Iranian Letters from Tentland were now overwritten, answered and sent return to sender by exiled Iranian women. So statements were transformed into answers by return mail. The bodies of the female performers disappear in the tents, but you can feel their inner tension. In this piece as response, the dance is about the supposed liberties of exile. For the exiled, the tent is a symbol of their unstable lives and also a piece of home which they cannot rid themselves of. They move on the dividing line between the two cultures, and heavily bump into both sides.