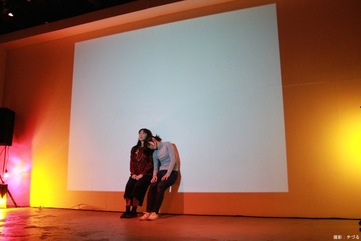 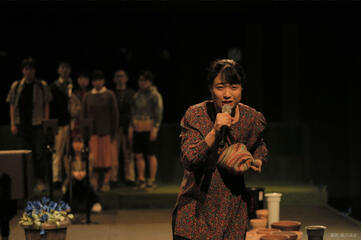 Group leader Anasako believes that the roots of the act of rhyming words are in causing the sounds and meanings of words to coincide, or synchronize. Depending on the structure of a rhyming verse, it can convey a sense of intentionality or unintentionality, and the group explores the possibilities of the process of words starting to take on new definitions, which they describe as “the inducement of drama through language.” Through the capricious transmutation of meaning and sound, they aim to stage works of drama that alter the landscape in the manner of a multifaceted crystal reflecting light, and to reinterpret relationships between text and performance.

This group was formed in 2012 and is headed by Anasako Shinichi. Its activities involve creating and performing new plays. These dramas incorporate lyrics and are characterized by a focus on “the insignificance of the individual,” based on an approach applying musical elements to speech and structure, while exploring the fundamental nature of the world.

Back to
OPEN SITE 5