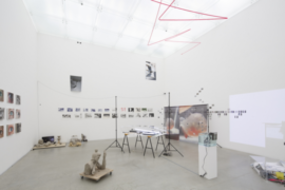 I would like to research and produce in order to further deep the theme of "Image humidity" which is the concept of current production. " Image humidity " is also related to the perception of gaseous state before perception became a system of representation. I think that the image contains material things with such humidity. Taipei, which is both a historically and culturally complex city and climate warm and humid land, the city itself constitutes a huge material environment of the image. I would like to deep my works and concepts by touching the city, nature and people's activities of Taipei.

-Create an image map relating to "image humidity" through field work. While walking around the city and the suburbs, research on the uncertainty of the image and map them.
-I work based on image map. I will make an installation based on the collected images.
-I will have an open studio in a solo exhibition at the end of the residence.