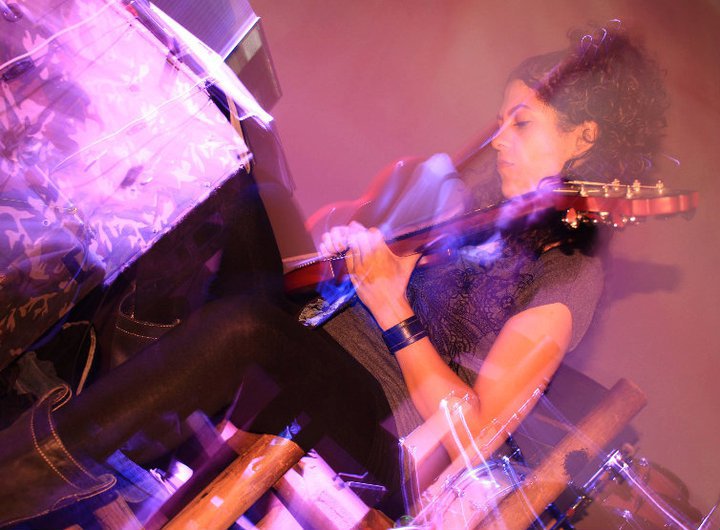 Born in Bogotá, Colombia en 1976. Studied Composition with Catalina Peralta at Los Andes University, where she graduated in 2000. She also studied guitar with Carlos Rocca Lynn. She has carried out several studies, classes and courses with Ricardo Gallardo, Alejandro Iglesias Rossi, Alfredo del Mónaco, Mario Lavista, Graciela Paraskevaídis, Coriún Aharonián, Blás Emilio Atehortúa, Rodolfo Acosta, Thomas Patterson, Víctor Rasgado, Juan Reyes and Ernesto Romero among others. Her work has been played in several concert halls in Colombia, Venezuela, Mexico, United States, Europe, China and India and have also been played by many different soloists and chamber ensembles, among them Tambuco, Mexican percussion Ensemble, in whose CD Serie Iberoamericana Vol. I is included "de los tiempos del ruido". Her work "Palíndromos" got an honorific mention at the Third Latin-American Harp Encounter in Venezuela. In 2003 she was granted an Artistic Residence at the Multimedia Center in the National Center for the Arts in Mexico City, where she lives since 2001. In 2010 she was granted a scholarship to be part of the program Prácticas del Vuelo at the Centro Mexicano para la Música y las Artes Sonoras (CMMAS) in Morelia, Michoacán, where she composed a piece for Ensable 3 and live electronics. In 2010 she was also invited to participate at Visiones Sonoras Festival at CMMAS. From 2008 she works with SuperCollider, programming and improvising music. She keeps on developing projects at the Multimedia Center in Cenart, with the support of Robotics and Audio Workshops. Her work focuses on experimentation, using electronics and improvisation as one of her main influences and also enjoys constructing her own interfaces and controllers.

The practice of improvising music can take many shapes and can have many meanings. As a composer, I have always felt drawn to the practice of creating music in the moment. My work has explored this way of musical creation in many levels: from the completely written score with little improvisatory interludes, to completely free improvisations. My work with SuperCollider and other programming languages is focused on creating music that is not static, but that changes every time a work is played. These kind of aleatory algorithms are a fundamental part of my compositive work and are the basis of my research as a programmer and improviser.