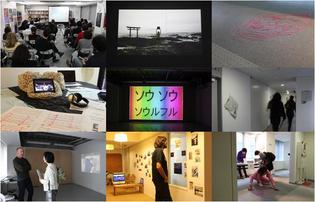 TWS Aoyama: Creator-in-Residence organizes monthly public program, "OPEN STUDIO" which is for the public to see the creative process of residing creators, to communicate and to exchange ideas about their works. In each studio, creators present the progress of their works or research in various ways.
In this month, David Elliott (Artistic Director of the Kyiv International Biennial of Contemporary Art(Ukraine) in 2012, Former Director of Mori Art Museum)will give a talk as an International Advisor! Please don't miss this precious opportunity!

One of the most influential world curators, writers and museum directors. In particular, he curated the 17th International Biennale of Sydney (THE BEAUTY OF DISTANCE: Songs of Survival in a Precarious Age, 2008-2010). Also he established and headed Mori Art Museum in Tokyo (2001-2006) and was the director of Moderna Museeet (National Museum of Modern Art) in Stockholm (1996-2001) and the Istanbul Museum of Modern Art (2007). From 1976 to 1996 he directed a ground breaking international programme at the Museum of Modern Art in Oxford, UK. He is currently Artistic Director of the First Kyiv International Biennial of Contemporary Art  (Ukraine) entitled "The Best of Times and The Worst of Times. Rebirth and Apocalypse in Contemporary Art" (2012) and is Senior Adviser on the development of a new contemporary visual arts hub due to open in Hong Kong in summer 2014.