Juha T. Koskinen (born in 1972 in Espoo, Finland) graduated in composition from the Sibelius-Academy in Helsinki. He continued his studies at the Conservatory of Lyon and at IRCAM in Paris. His composition teachers have been Kalevi Aho, Paavo Heininen, Kaija Saariaho and Philippe Manoury. In 2004 his composition Sogni di Dante (Dante's Dreams) received the Takefu International Composition Award. Koskinen's music has been performed in various festivals in several European countries and in Japan.

Koskinen has collaborated with the Finnish contemporary opera company Ooppera Skaala and written for them 4 chamber operas: Velhosiskot (The Witch Company, 1996), Eukko - pidättekö vainajista (The Old Woman - are you fond of Dead People, 2000), Brunelda (2002) and Madame de Sade (2010), based on Yukio Mishima's play Sado koshaku fujin. The Finnish Radio Symphony Orchestra has commissioned 4 works from Koskinen, the most important ones are Hehkuva graniitti (Incandescent Granite) (2001) and Symphony No. 1 (2006). Koskinen has also composed electroacoustic and chamber music: his String Quartet No. 1 (2005) is written for the Diotima Quartet.

I'm very interested in different concepts of time in music: how cyclical and linear time concepts can complement each other. This is intimately connected to my fascination of the sacred: I feel that in music we can find an expression for a dynamic unity of otherwise incompatible contents. My compositions are rooted in the traditional European classical tradition, but at the same time I like to let my music grow freely towards unknown directions. 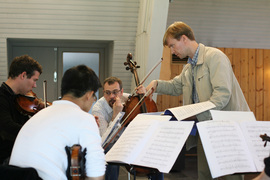