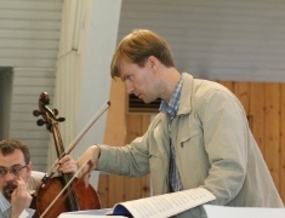 The main purpose of my residency in TWS is to develop my composition cycle "Bashô Fragments" in collaboration with Japanese musicians. I'd like to explore various physical and mental spaces in Tokyo and to feel the presence of multifarious time layers in the life of the huge metropolis.

I hope to find among the residents of TWS an artist of another discipline who could give a new perspective to my project. I'd like to establish a personal itinerary in the urban landscape of Tokyo which would correspond to my compositional processes, something like the concept of famous places (uta-makura) in the traditional Japanese poetry.


Achievements of the residency

To live a longer period in the heart of Tokyo is the best school to learn more about the everyday life of this huge metropole. The residency at Tokyo Wonder Site gave me the possibility to develop further my interests in the Japanese culture. I could go to the Noh and Gidayu performances, I could discuss with important composers like Toshi Ichiyanagi and Joji Yuasa, I could meet young artists from many different countries. During my residency at TWS I finished the score of Madame de Sade, a chamber opera based on the Yukio Mishima's play Sado koshaku fujin. Tokyo was the best place to do that because at the same time it opened a new path for the future: I had the courage to buy the original text of the Mishima's play and I began to read some passages in Japanese. Already seeing a text I knew so well from the Finnish translation written with Chinese and Japanese characters gave me some new intuitions about the fundamental differences between Western and Japanese thought. I could see that the time-space concept ("ma") is everywhere present in the Japanese culture, also in the speech and in the writing. We had many long and interesting discussions about the subject with Chikako Morishita, the Japanese composer resident at the TWS.
I understood that my interpretation of the Mishima's play remains completely Western as long as it's connected only to a Western language.


Outcome of the exchange

For the OPEN STUDIO I had a collaboration project with Yuko Kamei who is also a resident in TWS. Our project called Ambra ("amber" in Italian language) had as a point of departure a phrase from Yukio Mishima's play "Sado koshaku fujin". In the 3. act the main character Renée is speaking about her memories like insects in the amber (kohaku no mushi). With Yuko we tried to imagine what kind of material is amber, about it's special color and consistency. The fossilized insects which lay thousands of years in the amber under the sea have something in common with the Japanese semi (cicada) which also before the intense final period stay many years under the earth. For the electronic sound of our performance I used a well known haiku text from Matsuo Bashô: semi no koe ("cicada's voice"). Yuko made an "amber-like" choreography which she also performed. We had a special attention regarding the space-time constraints of our performance: Yuko's movements defined a restraint space before the public and she continued a little while even the sound was already extinguished. 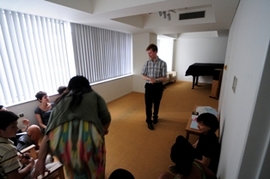 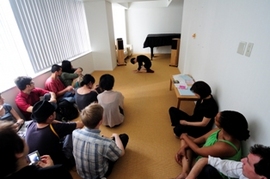 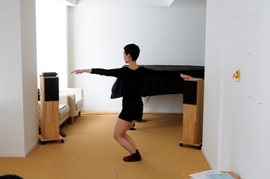