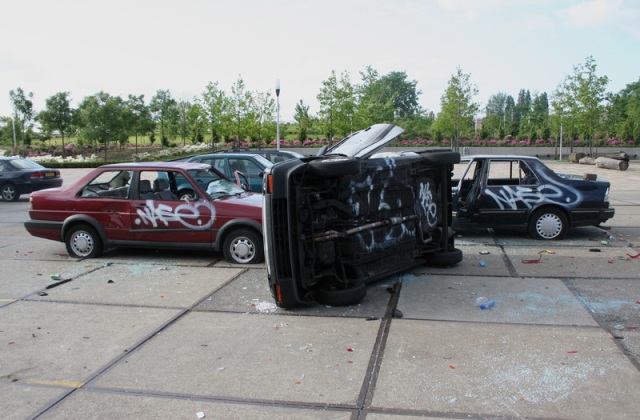 Jonas Staal studied monumental art in Enschede, The Netherlands and Boston MA, USA. His work functions in the domain of public interventions: installations, performances and Aktionen, executed (illegally) in public space. His artistic research anticipates and deals with the political developments in contemporary society in the form of lectures, essays, pamphlets and exhibitions in the public domain as well as institutional contexts.
Staal works and lives as a visual artist in Rotterdam, The Netherlands.

Since 2007 Van Gerven Oei and Staal have actively researched the concept of democratism within different contexts: from the Netherlands, to Chicago and Beijing. Within each of these contexts they have investigated the meaning of public space as a 'democratic' space: a platform where citizens - artists - can meet and confront each other. But also as an ideological space that represents the ideal of democratism as an 'open' society. Through international exhibitions, publications, the organisation and participation in lectures and debates Van Gerven Oei and Staal attempt to dissect and redesign the meaning and use of the public domain.