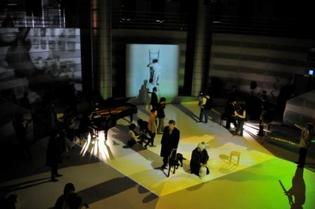 Ensemble Modern members and young musicians will play works by a variety of composers, from John Cage and Toshi Ichiyanagi to younger generations in the same stream. In addition, the special chamber orchestra organized for this academy will play Toshi Ichiyanagi's Symphony No. 8 "Revelation 2011"，and a tryout of Music Theater will be performed, collaborated with tutors who are active at the frontline of world's art scene.

Don't miss experimental stage where sensibility, technique and experience of tutors and participants from various art fields are mixed together.

Written by Toshi Ichiyanagi after the Great East Japan Earthquake, Symphony No. 8--"Revelation 2011" (chamber orchestra version) is an evocative work which poses important questions about the relationships among nature, civilization and human. It was born of the artist's wish to know what art can do in the face of this enormous reality. Made up of four sections entitled "Premonition," "Fleeting," "Requiem" and "Revival," the work as a whole is wrapped in images of cycle and impermanence. It asks us the question, "How can we inherit and renew the characteristically Japanese ways of thinking and the wisdom and experience for living which have been developed from unique traditions dating back to ancient times, and which are disappearing and being forgotten due to the spread of Western civilization?"

At this academy, we have produced two music theater works, "TOKYO" (at Vol.4) and "RENGA" (at Vol.4), supervised by Toshi Ichiyanagi. There were no conductors or directors, and we gave importance on spontaneous dialogues and connections in the course of the production. This way of production is not only oriental but also suggests how a new society should be. In "TOKYO", we translated basic components of Japnese gagaku music into modern expression, and in "RENGA" we employed the traditional Japanese poetic form known as renga to express various bonds and connections as prayers for March 11. At this third production, under the theme "John Cage x D.T. Suzuki x Toshi Ichiayanagi", we will step forward from "prayer" to tackle on the question thrown by Ichiyanagi in his 8th symphony "Revelation". We will hold the tryout on March 30 (Sat.), and continue to elaborate the production through workshops. The complete version will be performed in December, 2013.

Founded in 1980 and based in Frankfurt am Main, the Ensemble Modern (EM) is one of the world's leading ensembles of Contemporary Music. The EM is comprised of 19 soloists from all over the world. Its unique and distinctive program consists of music theater, dance and video projects, chamber music, ensemble and orchestral concerts. The EM gives approximately 100 concerts and 20 world-premieres each year.
+ Dietmar Wiesner (Flutist)
+ Ueli Wiget (Pianist)
+ Rumi Ogawa (Percussionist)
+ Michael M. Kasper (Cellist)

After coming back from New York in 1961, Ichiyanagi introduced many new musical concepts, including Cage's idea of indeterminacy, exerting a strong influence on the stream of the Japanese contemporary music. He has composed in most genres of music: operas, orchestral, chamber and instrumental works. He has been commissioned and invited by various music festivals in the world. He also serves as supervisor of Tokyo Wonder Site Music Program. He was honored as one of the Persons in Cultural Merit in 2008.