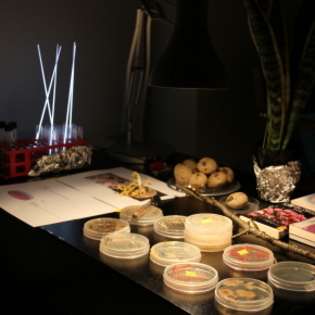 TWS Aoyama: Creator-in-Residence organizes public program, "OPEN STUDIO" which is for the public to see the creative process of residing creators to communicate and to exchange ideas about their works. In each studio, creators present the progress of their works or research in various ways. 10 creators from 6 countries will show their studio. There will be a studio tour and some performances.

Takahiro Kaneshima is executive director of ART FAIR TOKYO since 2010, and is also director of FEC (Far East Contemporaries) since 2008 where he is committed to assist Asian artists and encourage the international art exchange program along with the research project of East Asian contemporary art. He has curated exhibitions ranging from contemporary art to fashion and to media art between Taiwan, China, Austria and Japan. His selected curatorial group exhibitions are : Discharge Mode To Order (Yokohama, 2008), Live by Play (Taipei, 2009), Next Reality (Yokohama, 2009), Contemporary airy crafts from Japan to Taiwan (Taipei, 2010), Parallel Far East Worlds (Chengdu , 2012). He also curated two solo shows for the Chinese artists, Sun Xun and Chen Wei, Beyond-ism (Yokohama, 2010) and Tight Rope (Yokohama, 2011). After receiving his MA from the Graduate School of Media and Governance at Keio University, he began carving a unique career with a background ranging from his employment at NOKIA Research Center (Finland), TOSHIBA Digital Media Company (Japan) and Tokyo Gallery + BTAP (China) before founding FEC in 2007. Also as a committee member of the city art project "Creative City Yokohama", he has been supporting its art and culture activity in that region.