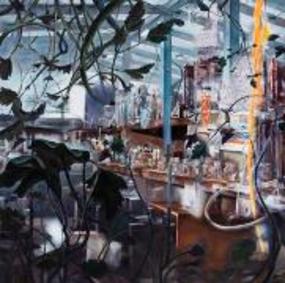 The residency at Tokyo Wonder Site will be primarily devoted to the research on Japanese Theatre, music, and paper art (pop-up books). Another subject of my study will focus on the historical trace of the Japanese delegation in the Joseon Dynasty period along with the music and episodes in the Japanese traditional plays. I am particularly interested in the creating new episodes that cross the boundary between fiction and reality.

Prior to the official beginning of my residency, I wish to check into the trails and records of the Japanese delegation in Joseon Dynasty and visit the museums to collect ideas on the spot and archive historical facts. My research at the residency will gear towards formulating general ideas on my new project that will involve around the study of traditional Japanese Theatre, especially of Kabuki and Noh plays. My focus will be on the spatial investigation of its stage design and musical components. I plan to apply the results of my studies to my new project and present the resulting studies through seminars and share opinions at the open panel discussion in the final week.

Achievements of the residency
The location of Tokyo Wonder site proved to be extremely convenient in terms of its connection to the great sceneries and sites that embody the traditional Japanese atmosphere. All the staff's cooperation went very well and the other participants at the residency from different countries made the cultural exchange all the more interesting and memorable. I also had various talks with the professors through the meetings and was able to observe the exhibitions on Japanese contemporary art and the curatorial efforts and display plans that accompany each show.
Although the time given was very limited, I was able to form various ideas from the exhibitions, concerts, Kabuki, and Noh. What particularly captured my interest was the concept of "Ma" that states the fluid relationship between music and space. In conjunction to the randomness in contemporary culture, ma emphasizes progression by improvisation, which also speaks to the concept behind Japanese Landscape Architecture. Further research on Japanese traditional stage design and performance space was made, in order to apply them to my current film works. The use of greenhouse as the ultimate materialization of a society's artificial and psychological landscape has occupied my work since before the residency. With the new studies on the aesthetics of Japanese architecture that embodies greenhouse design and geological characteristics, I was able to form a bigger cultural map based on the previous idea. There were interesting points to note on the relationship between Korea and Japan that speaks not to a particular time period in the past but to here and now of the two nations that are geographically linked within Asia.
Overall, the time spent at residency offered various important points to consider and apply to the current projects in progress. I also highly value the in-depth conversations we had on my works. I wish to receive further meaningful feedbacks and hope the acquaintances formed will lead to fruitful future relationships.