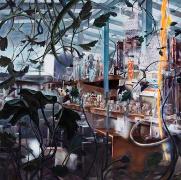 Kyungwon Moon was born in Seoul, Korea in 1969. She studied painting at Ewha Womans University in Seoul, Korea. She received her M.F.A at California Institute of the Arts, CA, USA.  Since then, she has shown her works through diverse medium that could speak to the contextual element of her works. Recent notable group exhibitions include, A Different Similarity shown both at BOCUM Museum, Germany (2010) and Santral Istanbul Museum, Turkey (2009), Now Jump at Nam June Paik Art Center, Korea (2008), Modest Monuments King's Lynn Arts Centre, UK (2008). The artist currently lives and works in Seoul.

Sungnyemun, one of the historical remains in Seoul, symbolizes the trajectory of layered time, and at the same time, acts as a silent witness who acknowledges the presence of trivial urban lives and the fragments and residues of time around itself. This installation work depicts the historic site in somewhat abstract form, but its historic and social significance is consciously amplified. Having lost its physical presence in history due to arson in 2008, Moon's work provides the artist and viewers with an opportunity for a collective mourning. 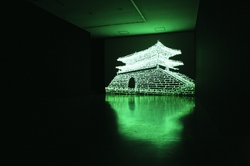 <Superposition> is an imaginary documentation on the history of a very specific site in Seoul called Kimusa. This Kimusa (located in Sogeok-dong 165) served as a space of communication in the past. However, it became a closed area for autocrats excluding the public throughout the modern history. As it comes back to the public as a space of art and culture, this film talks about the meanings of this special place that is returned to the citizen as a new art and cultural venue. 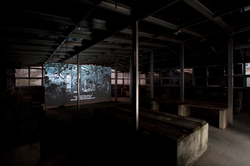 <GreenHouse I _1909> is an installation art that reconstructed the Changgyeonggung Greenhouse. It is a significant monument, a further development from Moon's previous attempts at re-illuminating the past and the present of such historic and public sites as Sungnyemun, Seoul and Pyongyang, Seoul Square, and the DSC greenhouse.

<GreenHouse_1909> is a product of the long and laborious process of dismantling and reconstructing, which involves estimating, calculating, distorting, and transforming of the greenhouse from various viewpoints. It also required numerous drawings, architectural simulations, CAD work, and woodworking. Though deformed, the artwork has been rendered as elegantly as to match the beauty of the original greenhouse.

All Moon's works start with drawings and by combining sensibility and grafting together the media's characteristics she expresses the moments of our nowadays. The artist focuses on 'landscapes' in nature but also on objects resulting from man's interaction with inhabited space. Moon's work contains a political dimension that addresses a vision of the social context produced by humans and the energy they create in a specific time and space. The artist uses media technology in the same way she works with drawing.

Achievements of the residency
The location of Tokyo Wonder site proved to be extremely convenient in terms of its connection to the great sceneries and sites that embody the traditional Japanese atmosphere. All the staff's cooperation went very well and the other participants at the residency from different countries made the cultural exchange all the more interesting and memorable. I also had various talks with the professors through the meetings and was able to observe the exhibitions on Japanese contemporary art and the curatorial efforts and display plans that accompany each show.
Although the time given was very limited, I was able to form various ideas from the exhibitions, concerts, Kabuki, and Noh. What particularly captured my interest was the concept of "Ma" that states the fluid relationship between music and space. In conjunction to the randomness in contemporary culture, ma emphasizes progression by improvisation, which also speaks to the concept behind Japanese Landscape Architecture. Further research on Japanese traditional stage design and performance space was made, in order to apply them to my current film works. The use of greenhouse as the ultimate materialization of a society's artificial and psychological landscape has occupied my work since before the residency. With the new studies on the aesthetics of Japanese architecture that embodies greenhouse design and geological characteristics, I was able to form a bigger cultural map based on the previous idea. There were interesting points to note on the relationship between Korea and Japan that speaks not to a particular time period in the past but to here and now of the two nations that are geographically linked within Asia.
Overall, the time spent at residency offered various important points to consider and apply to the current projects in progress. I also highly value the in-depth conversations we had on my works. I wish to receive further meaningful feedbacks and hope the acquaintances formed will lead to fruitful future relationships.