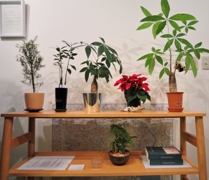 The project 'The New Large' reflects my work process fairly well. The project started with my interest in status, status anxiety and value. To get started with this I bought a second-hand luxury car. I wanted to investigate class, economic structures and status by using this car which once was a true status symbol.
How could a car work as a catalyst for different processes regarding social and economic structures in society? I began by examining all of the cars owners and contacted them for possible interviews. I also contacted the factory that had produced the car and the car dealer who initially had placed the order. Then I staged a backward journey from poor to rich, all the way back to the factory were the car once was manufactured. Along the way, I interviewed all former owners and representatives of the factory that made the car. After a sponsored renovation of the car, I decided to return to the original ideas about status, status anxiety and value. I delicately placed the completely renovated car in a recycling plant to separate the metal from all the other materials of the car, to withdraw the actual value of a car, the metals. After doing this, I had metal worth 85 GBP. This metal was brought back into an industrial production line that involved 3-D modeling, NCC-production methods and casting foundries. The metal of the car was then redesigned to its original symbolic sign-value, a solid, 700 kg heavy ejaculating penis. Finally, the sculpture was a painted in the same color as the original car, "Black Diamond 181".